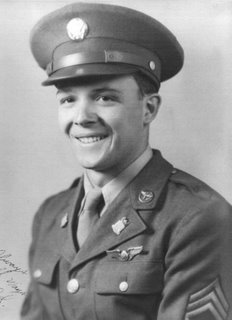 My grandfather, Emuel Edward Vassey Jr., enlisted in the Army Air Corps during World War II and served in Europe flying bombing runs. It was still during the war when he met my grandmother, but he would not marry her until he had finished his required number of bombing runs. He didn't want to risk leaving her a war widow.

They married in 1944, and he left the service for a couple of years after the war, working in the commercial aviation sector, but then he re-enlisted and spent the rest of his career in the newly-formed U.S. Air Force. I was about 4 when he retired, but I have some faint memories of being shown around one of the planes he flew in as a navigator on the base in Charleston, SC. When he retired he was a Senior Master Sargeant, a noncommissioned officer, and he had served during three wars - WW II, Korea, and Vietnam. He and my grandmother had also raised four children and by then had 5 or 6 grandchildren, as well.

Although he loved to watch war and military documentaries and movies, he spoke very little about his own experiences during the war. He also was not a churchgoer, even though he came from a religious family, and I always wondered how his war experiences had shaped him and if they had something to do with this departure from his upbringing. After his death almost 3 years ago, I asked my grandmother if he had ever discussed these things with her. I wasn't terribly surprised when she told me that he had not.

War, as General Sherman very succinctly put it, is hell, and I certainly would never wish it on anyone - not my grandfather, not the soldiers who are currently dying or being maimed due to W's caprice. Still, my grandfather came through it and remained a loving, kind, humorous, and generous man. We will always keep his memory in our hearts -always, all ways.
Posted by Mel at 4:39 AM

This was a very nice tribute to your Granddad and to all other veterans.

Hats off to your grandfather and all our nations veterans and current soldiers.

I love the fact that your grandparents married 3 years after my parents got hitched at Bolling A.F.B.