So here we are into the second half of June and I haven't posted since early on the first, before we headed south for my grandmother's funeral. Suffice to say it's been busy as all hell since I got home, and I'm just beginning to feel like I'm breaking the surface a bit to catch my breath. So I guess the thing to do at this point is backtrack a little and talk a bit about the trip.

Mostly it was just good to spend time with family and catch up a little with members of the extended family and people who may as well be family, some of whom I hadn't seen in years. It was also nice to be there with everything all leafed out and lush (And HUMID! Sweet FSM, was it humid!). I'm pretty sure I could never live in that climate again, but little doses remind me of my childhood, and I'm perfectly okay with that.

Another echo of my childhood came the day after the funeral. I had an errand to run and on my way back to my parents' house I spied this beauty on the side of the road: As far as I can tell, she's an Eastern Painted Turtle of considerable age and, had I weighed and measured her, possibly of record size. She'd left a small farm pond nearby looking for some nicer real estate, but if I hadn't stopped to pick her up, she'd have likely ended up as a turtle pancake on a hot country road.

So after taking her back to my folks' and snapping a few photos, I took her off to the edge of the woods, through which she could get to my grandfather's pond and the creek. I sat down for a bit to see if she'd come out of her shell for a better photo, but she was having none of it. I did, however, manage to pick up a mess of these: That, friends, is a genuine chigger, a true Southern institution and a rite of passage I really don't enjoy repeating. On the other hand, there were some ripe blackberries near at hand, so just maybe the pleasure slightly mitigated the ungodly itch.
Posted by Mel at 7:10 AM 11 comments: 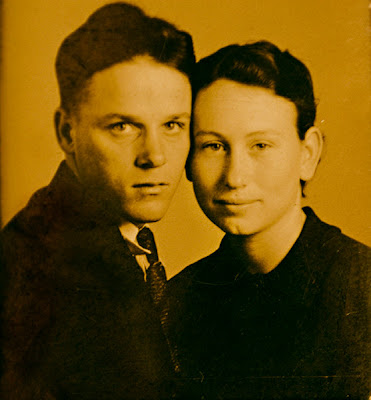 My maternal grandmother passed away Saturday night. It was expected, as her body had been slowly failing her for quite some time. Her health was, in fact, one of the main reasons for my visit in March, as I knew it was likely that I wouldn't get another chance to see her. Hospice was called in a few weeks ago, and being the phenomenal organization they are, they were a tremendous help in easing her transition from this existence to the next.

The photo above is from just after their wedding in 1936, which was just 5 days after her 17th birthday. They first lived in a cabin across the road from her parents, where they had their first child, and from which she went out the next day to work in the fields. It was the Great Depression, and not working was a luxury they couldn't afford.

A few years later, when they bought land about a mile down the road and built the home she would spend the rest of her life in, she and my grandfather fenced in 80 acres of pasture working side-by-side. Having fenced in a smaller section of that same pasture, I know very well what a feat it was, but their relationship was always one of equal partners, and it was from her that I learned about the grace and beauty of a strong woman. Even as her body betrayed her, she maintained her wit and her ability to laugh, but she knew it was time to go and she was ready for it.

Yes, I will miss her dearly, because how could you not miss someone so fiercely wonderful? But it's a bittersweet sort of loss, because in the end there's so much of her in me and in everyone else whose lives she touched. And I can't think of any tribute more beautiful than keeping that part of her alive and sharing it with everyone in my own life. Because again, how could you not?
Posted by Mel at 12:26 AM 32 comments: