So, I haven't updated this in quite a while, and a lot has changed. The big thing recently is that I took a job as a government contractor with a company that supplies bomb-sniffing and other working dogs to overseas contracts. Just over two weeks ago I arrived on a one year contract as in-house veterinarian on a base in Iraq. The big reason for the jump, aside from the money and moving away from private practice, is that the experience should serve me very well when I apply to federal fellowship programs for next year.

So far it's been interesting work. The problems I've encountered have been fairly standard fare, but I'm working with a mix of American, Iraqi, and South African dog handlers, who are by and large really decent and fun people to work with. The dogs range from total sweethearts to eat-your-face-off types, but I rely on the handlers to hold the dogs so I can do my job, and I really love watching all of them work. They're just amazing and really love what they do.

I'm working on learning some Arabic, and the little I do know is already coming in handy. This evening I came out of the shower building to three Iraqi kids from a cleaning crew asking me if it was "Hospital?" After I walked them down to the clinic here on the contractor compound, which had closed for the night, I realized they must have seen me in my scrub top and thought I was the doctor. I was able to explain to them that I'm the veterinarian and that tomorrow there will be an Iraqi doctor at the clinic. By the end of this, I hope to have an additional language skill, which will also come in handy when applying to fellowships.

And aside from all of that, the desert dawns have been quite spectacular. Yesterday I went downhill skiing for the first time in over 22 years. I turn 44 in a few weeks, so that's literally half my lifetime. The last time was in 1991, when I was a first year veterinary student. A group of us spent a weekend at Lutsen.

It was a fun enough weekend, but what I remember most is taking a lift to a second, not very developed, peak that, on the trail maps, had a blue (intermediate) main slope. On the ground, that trail turned to black diamond (advanced) about halfway down with no warning and no alternative way out. For someone who'd only been skiing two or three times as a kid, it was a bit intense. The following summer I messed up my knee, so I didn't feel particularly compelled to try again.

This season, though, David, who also hadn't skied in about 20 years, decided he wanted to try again. So last week, he went with friends of ours while I was at work. This week, my Wednesday was free for the first time in 6 months, as I've been temporarily laid off from job #2 due to the economy (a first for me). David found a midweek deal at a resort within driving distance, so we got up early and headed out.

The deal included a 2-hour lesson, equipment rentals, and a limited lift ticket, which meant we could only use one lift to a fairly short trail. Seeing as it had been so long, it was a pretty good way to get my feet metaphorically wet again. I realized pretty quickly, though, that I was better than I remembered, most likely because I wasn't struggling with a slope way beyond my skill level. I expect all the years of yoga and taiji and learning to pay attention to what my body's doing helped, too. Whatever it is, it looks like we're going to have a new winter pastime.

It took me almost a year to finally get around to finishing this lopapeysu, but the frustrations along the way were so worth the final product. I had to redo the neck twice, and then I had to go back and completely rip out and redo the first sleeve after I realized it was too narrow. The perils of making it up as you go along, I suppose. Next time I go to Iceland, though, this is definitely going along, if nothing else so I can see what Icelanders make of the pattern. In fact, let's just get a close-up of that yoke.

That's the totally kickass Deathflake motif (Ravelry link) paired with a Viking sword motif of my own design. A more badass lopapeysu you'd be hard-pressed to find.
Posted by Mel at 3:25 PM 6 comments:

A couple of weeks ago, I noticed that a hole had opened up on one of my felted wool slippers (Haflingers - I heart them greatly).

Life being what it is, I hadn't gotten around to doing anything about it, but it was bugging me, so this morning I grabbed a ball of Shetland Spindrift and a couple of 2.0mm dpns and...

I also used the opportunity to practice knitting in reverse. I can do it almost (but not quite) as fast as I purl now and saved a little time by not needing to turn. It's a handy skill for working short rows. At any rate, felting up my little patch was a very quick affair, seeing as it's Shetland wool.

Then all it took was a tapestry needle, a length of the Spindrift, and a little whip stitch action, et voilà!

I assume most folks who stop by here have heard of Tuvan throat singing, but in case you haven't, it's this:

It's a type of what's called overtone singing, where the human voice operates something like a bagpipe -simultaneously producing both a constant drone note and overtones that carry a melodic line. It's also found in some Tibetan Buddhist chant.

Anyway, it's neat stuff, and while I don't speak the languages nor do I know the exact technique, it is fun to try to play around with the concept. I can usually get a little bit of a harmonic going, too, though nothing approaching the high, whistling overtones the Tuvans can belt out.

So this evening while making dinner, I was singing to the dogs and generally being silly, and once I was done with my prep work, I decided to sit on the floor to serenade them. I'd been trying to sing a song - I don't remember which - in a low bass, but on the low note I kept ending up well sharp of where I needed to be. The dogs seemed particularly interested by the low notes, though, so I decided to start in with a low drone and tried adding in some overtones.

Theo got in close, but then jumped back, not quite sure what to make of it. Chauce stood and watched me for a bit, but all of a sudden he decided he couldn't hold in his excitement and sprang forward, the top of his head slamming into my upper lip and driving it against the edge of my teeth.

There wasn't as much blood as I feared there would be, but it stung when I taste tested the stew I was cooking, it stung when I was eating, and because it's still rubbing against the edge of my teeth, it stings right now. If I wake up tomorrow with a noticeably swollen lip, I'm telling everyone that David came home drunk and slapped me around.

Which will make anyone who knows David pee their pants laughing.
Posted by Mel at 11:18 PM 3 comments:

I took no photos during the festival this year. Actually, I take that back. I took this one for Carol, who wasn't able to make it this year.

And then the ever-adorable Stephen West stopped by to dance under the disco ball in his knit hotpants.

As always, it was a good show, and great getting to see all the people that we only seem to see once a year. Also, buying wonderful things. I came home with a gorgeous black Icelandic fleece, which I'll be taking off for processing so that I'll actually be able to knit something with it in my lifetime. I also found a perfect contrast yarn to make Julia Farwell Clay's Queequeg (which I'll be modifying to eliminate the boob shaping, and possibly with rolled hems). And in case you didn't know, Edie Eckman's latest book made its debut at Rhinebeck.

Maybe I'll show up next year with granny hex hotpants in lieu of the kilt.
Posted by Mel at 9:18 AM No comments:

Now We Are Six (Months)

We also got neutered 9 days ago and started obedience school 4 days ago, but we're managing both pretty well.
Posted by Mel at 10:42 PM 4 comments:

What I Did on My Summer Vacation

So anyway, here's the short, short version of my summer. We went to South Dakota to visit the in-laws.

N.B. - These are not the in-laws, but I did take the photo in South Dakota.

Part of that trip required that we publicly embarrass ourselves.


Then I had a super busy July at work. Of which I have no readily available photos. And then I managed to be away for most of the month of August. First I went to San Diego for a conference. For funsies one afternoon, I took the trolley down to the border and spent a few hours in Tijuana.

It was dirty and sad and pretty much what I expected, and now that I've been there I don't have to go back. Perhaps someday I can visit a nicer part of Mexico (by which I do not mean Cancún). At any rate, I got back from that trip and was only home for a week before we left for...

This time my parents went with us, and we were there for nearly two weeks and had an absolute blast.

That's sheep! By the ocean! On a fjord! And even though you can't really tell, those are seals out on a shoal behind them! And I have a whole huge whack of photos from the trip here. All I can say is that the trip totally refueled my desire to live there, even if it's only for a year. Or three. Or maybe a decade. Or longer. Meantime, a lot of wool came home with me, and there has been knitting.

Chauce is always excited to get home from work so he can see little brother Theo. David's glad when Chauce gets home so somebody else can deal with all the puppy energy.

That last post? The question was more or less rhetorical. 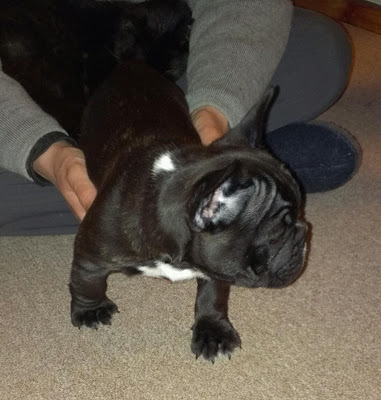 No name, as yet, but hopefully within the next couple of days. We got to meet both parents, and they were very nice dogs. Out of the 5 (!!) pups in his litter, he seemed to be the most easygoing, and he gives sweet puppy kisses. He still has quite a bit of puppy energy, though, and I expect the next few months will be interesting.

Chauce has been very good, but he's made it clear that he is Alpha. Fortunately, the pup knows to pay attention, though I can already see him testing to see just where his limits lie. Did I mention the next few months are going to be interesting?