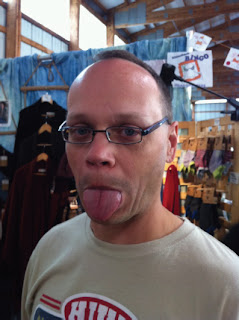 That's not actually a sentiment I'm expressing, particularly as regards Rhinebeck. Caro was doing some photography work at the show, though, and David and I got recruited (without any resistance, truly) to be knitwear models. I suppose that if I took the time to poke around, I could figure out how secretive we're supposed to be. It's late, though, and I'm tired, so I'll just not say any more about that, except that the above is my pose for the official model release form. Maybe I should start sending it out to modeling agencies as my headshot.

I'll write a bit more later, once I've had time to sleep, but it was a good weekend. As always, the show is ever so much more about the people you get to see than the fiber you get to pet, take home, and do lascivious things with - not necessarily, of course, in that order. There were people I missed and people I got to spend far too little time with, which is the part I always hate, but in the main, it was a fun time.

Tomorrow, however, I have massages scheduled for both David and myself, and the appointment time cannot get here too quickly.
Posted by Mel at 11:46 PM 2 comments:

It's That Time Again, Already?! 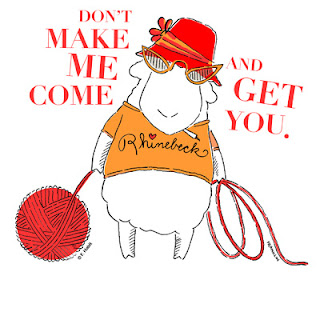 Once again, we're going to be the headquarters for Rhinebeck Bingo, too, so if you've signed up, be sure to come by. We'll have coupons for participants, but more importantly, I love just getting to say, "O hai!" And since my brain sometimes has a hard time remembering people, it's often as exciting for me as the last 4 times I met you. So even if you're not doing the bingo thing, come by anyway. It'll be fun!
Posted by Mel at 9:41 PM 4 comments:

So it's been another really long stretch between posts. A lot has happened, but I have a hard time lately finding the time to blog about it. So, some other time, but before I head off to bed I thought I'd share a little story.
On Sunday night, I had my first migraine. That's not the story, but it happened in the lead-up to the story I wanted to share and it seemed noteworthy. I've had bad headaches before, but this one came with a seriously heavy dose of nausea. So severe that I basically had to hold my breath when I took the quiche I was baking out of the oven and immediately afterward go to bed, because the smell of even really, really delicious food was going to make me hurl, which is something I almost never do. When you consider that the last time I had actually vomited was exactly 6½ years earlier (my birthday in 2005, when my friends took me to a martini bar 2 weeks after S had dumped me), to be that close to needing to make a mad dash to the Temple of the Porcelain God was more than a little significant.
Anyway, the actual story, as the title suggests, happened at 2AM. The pain and nausea had abated, littledog was getting a bit restless - which usually means he has to go pee - and I was realizing that I probably ought to, as well. So we both got up, and after I made my pit stop, we headed downstairs so Tuck could do the same.
It bears mentioning here, though I think I have also on prior occasions, that rather than a standard backyard, we have a sideyard off the kitchen ell, which was originally a cobbler's shop that was moved down the hillside and attached to the rest of the house - we think - sometime circa 1950. The yard access is through a kitchen mudroom, so the door is tucked in a corner of the building with the grass a few feet away.
So I opened the mudroom door and just as Tuck hopped down to go to the lawn and do his business, I realized there was a skunk - a small one, but a skunk, nonetheless - near the outside corner of the kitchen, not more than 8 feet from the door. Naturally, I immediately tried to reverse littledog's course, yelling, "Tuck! TUCK! TUCK!"
When it comes to his potty duties, though, littledog is very businesslike and singular of mind, particularly late at night, and he trotted right out into the grass to relieve himself, easily within 6 feet of le jeune M. LePew. I wouldn't be surprised if littledog never even noticed the creature, as it was dark and his vision isn't terribly good, but I'm equally fortunate that he is nearly completely incurious about other animals.
The other week there were two juvenile turkeys in the yard one evening when I let him out. He gave them a glance, but then turned around and headed right back to the house when he was done peeing. If they're not going to pick him up and give him lovin's, then they're not worth wasting time on, and that was pretty much how it went down with the skunk.
I think the poor little critter may have just been confused out of his mind. After all, here was this strange-looking, and maybe-or-maybe-not disinterested, dog off to one side, and a frantic, yelling human to the other side. With limited ammunition in his arsenal, the skunk made the wise decision and, thankfully, beat a hasty retreat without spraying anyone.
The even bigger miracle is how I ever managed to fall back asleep after that bit of excitement.
Posted by Mel at 10:21 PM 10 comments: