In Your Satin Tights, Fighting for Your Rights 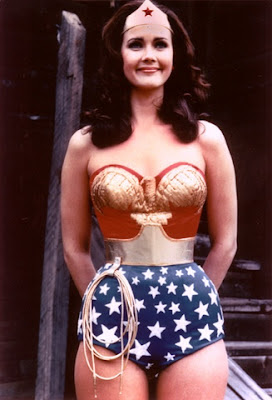 Last week, while picking up a couple items for the workplace at the local wholesale club, I happened to walk through the video section and spied the complete third season of Wonder Woman. Then I saw Season Two, and I got all excited. Might they possibly have Season One? Yes!

I showed great restraint and only bought Season One, and David was every bit as excited when I got home and showed him my purchase. So we have been working our way through the episodes (interspersed with episodes of The L Word - such lesbians we) and having a blast watching them. I think the show was one of those iconic programs that really defined childhood for most of us who grew up in the 70's, and for gay men who grew up then, the campy and drag queenish nature of the show gives it special resonance.

I had forgotten that only the first season took place during World War II. The photo above is from Season One. After that, they moved Wonder Woman up to modern day and gave her a decidedly sexier (and higher budget) look. 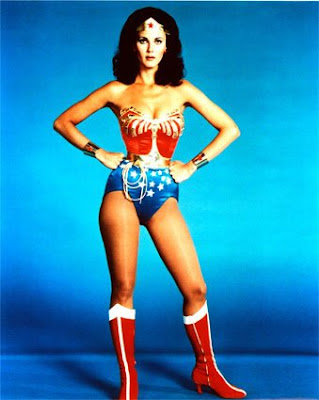 We have been loving low budget Season One, though. It took them until the 4th episode to do the flash of light as Wonder Woman spins into costume. Before that it was a double exposure of her in two costumes, and one particular shot was used in two episodes. Then there are all the old stock footage clips spliced in, and especially the mountainous desert landscapes of Maryland and Virginia. And then there's Wonder Woman's feminism-in-tights message - so very 1970's, feminism à la Enjoli. It just doesn't get any better.

Of Mice and Wool

Like KnitNZu, we have been having some rodent issues. They actually moved in last fall and drove the cats nuts all winter long running around in the walls. We thought it was perhaps an infestation of elephants, but it appears that it's just mice. I bought two Havahart traps - one big enough for a rat and one big enough for a mouse - but I only recently set them up in our attic crawlspace where I had found evidence of some tunneling into the insulation.

The first mouse trapped met an unpleasant end, I'm afraid. After not catching anything for a few days, I forgot to check the trap for a couple days. It had not been long dead, as there was no odor, but the crawlspace is not well insulated and is on the south side of the house, so it gets hotter than a half-fucked fox in a forest fire (to use a colorful expression of my grandfather's). Something did die inside the wall on that side of the house a few weeks back, and it was rather unpleasant for a few days.

Since then, we have been much more diligent in checking and have caught two more mice. We have taken them way back on the farm property to release them. They might make their way back, but they may also become food for the fox or for the feral cat who has taken up residence in the barn. Either way, they're at least out of the house for now.

There's been no sign to suggest they've gotten into my stash, most of which is in plastic bins and all of which is kept in areas where the cats have frequent access. I've tried not to think too much about the things stored in the crawlspace and how much mouse poo might be on them. I'll spare you photos of mouse poo, but the next time I catch a mouse, I'll try to remember to snap a pic of it.

Right now, though, there's some swatching to be done.
Posted by Mel at 12:52 AM

Thanks for not posting any more poo photos. I don't think I can take it another time. And please, take a photo of a mouse that's *alive* and not a dead one. :-p

How I love to see Wonder Woman first thing in the morning! Thanks.

I'm jealous of your DVDs.

Oh, my, doesn't that costume look uncomfortable? I suppose the effect wouldn't have been the same in sweats and a t-shirt. Look at the proportions!. "Hotter than a half-fucked fox in a forest fire"! With your permission, I'll add that to my list of colorful expressions.

LOLOL re the WonderWoman feminism of the 70s thing - those would be fun to watch again ;) I have an ancient kids record player with a WonderWoman 78 record - I should set it up and play it ;)

Between Wonder Woman, The Bionic Woman and Nancy Drew, I am proud to say that I grew up to be a very empowered woman. (with questionable taste in sportswear...)

Sorry to hear about the mice. But it could be worse. My friend and I had to deal with a bat infestation in her old house a number of years ago. It did not go well for some of the bats. Not well at all. Wonder Woman would've known what to do...

Okay, trivia question: what are those golden cuff bracelets actually called? I forget.

And at least she had a butt. Wicked far cry above vapid-faced Twiggy-types.

And I am forever grateful to Wonder Woman for the phrase, "don't make me get out my Golden Lasso of Truth, buddy." Okay, maybe I added the last bit, but it's fun to say :-)

Wow, how could you have passed up the other two seasons? Somehow, though I grew up in the 70's, I only saw a little Wonder Woman. I'll have to ask my bro (who is a yr younger, and gay, maybe he watched it?). LOVE your grandfather's expression! Maybe you should put up a post of some of his other great ones. We had a snake die in a wall one summer...it was HORRID! Those mice do sound like a herd of large creatures. One year, in Syracuse, we had rats. UGH. Another horrid experience! We trapped out a bunch (they kept coming in the basement-even through concrete!), then we ended up putting down steel mesh and a new floor. I'll take pesky mice any day over their larger cousins.

This past season of the L-Word was so much better than last - the season finale is fantastic, I actually still have it on my DVR to watch again...

OMG, I'd forgotten all about Wonder Woman! What a difference in appearance between season 1 and 2.

I'm stealing your Grandfather's expression; I love it!

Words cannot express how much I loved Wonder Woman. And the Bionic Woman, too. I used to wonder who would win a fight between them. Now I'd have to say Wonder Woman.

I wonder how much WW I would remember. Next to the Muppet Show and Dr. Who, it's one of my earliest TV memories. Something to rent in the future...