It was really a very mellow day, in a good sort of way. I got up around 2 something, which is not an unusual getting up time for me (I was still kind of tired after 10 hours' sleep, though, so I'm thinking I need to cut back the Requip dose a bit). I walked downstairs to find David with balloons in his hand and a deer-in-the-headlights look on his face. He'd slipped out while I was sleeping to get me a card, some dark chocolate, balloons and a cake, and I surprised him rather than the other way around. Tolo was pretty pleased with the balloons, too. My inbox was full of birthday wishes. Thank you all (and a special thank you to Scout, who put a rush on some new sportweight sock yarn to me. I can hardly wait!). I did a whole lot of nothing for a few hours until I had to get ready to head to Portland, where my folks met up with us to take us to dinner. Since they're less familiar with Portland than I am and since they hadn't seen the new clinic, we met up there, where I gave them the tour and where the staff had cooked me up an extra special confection. Then we went out to eat at the Sebago Brewing Company, since I'd never tried their beers before and was in the mood. I had the Hefeweizen with appetizers and the Boathouse Brown Ale with my wild mushroom ravioli and would recommend either. Yum. Then we all had some of the lemon creme & white chocolate cake that David had bought. Yum, again. Then we all headed home. 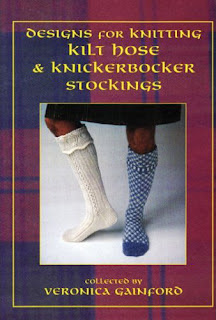 This is part of the wedding planning, of course, as it's a given that I have to wear handknit kilt hose with my kilt (which is yet to be made, but will be in a Baird Modern tartan). I have a 1 pound cone of DK superwash that is destined for this purpose, which should give me plenty to practice with to sort out the design I want.

I'm also awaiting some shade cards from Two Swans Yarns for the Jamieson's Spindrift. I already have shade cards for the Jamieson & Smith yarns, but I want to knit a Fair Isle vest in mostly undyed wool with some accent colors that reflect the colors of the kilt tartan, and the Spindrift will allow me to do that all in one weight of yarn. It also looks as though I may find better color matches, and I like that Jamieson's processes their wool right in Shetland, instead of shipping it to a mill in England like J & S. My Shetland forebears were fishers and crofters, which means they struggled to scrape by while the fruits of their labors got shipped off to Scotland and England and made other people wealthy, so if more of my money as a consumer stays on the islands, I see it a bit as paying back their legacy.
Posted by Mel at 1:02 AM

Are those balloons tied to the cat's arm? Or are they just being held by the power of the paw? Either way, SO cute! Now I want to go buy some for my guys.

Sounds like a nice birthday, Mel! Hope you have a nice trip to Portland.

I don't think I said it yet so, "Happy Birthday!!!!" It sounds like you had a really nice one. I do love ballooooooons! So festive...and such great kitty toys.