It's my blogiversary today! Kind of crept up on me, truth be told, but it's neat to think that I've been doing this for three years now and have been able to meet so many wonderful people because of it. Like knitnzu, who sent a package yesterday for the kitties. It was really sent with Cougar in mind, but Tolo had to be the first to shove his head in, much to his younger brother's chagrin. 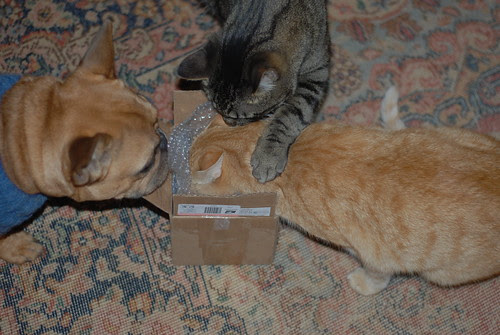 Of course, Cougar being the larger of the two managed to shove his way in pretty quickly. To say he was pleased with his present would be an understatement. In fact, it's already been disemboweled loved to pieces. He wasn't the only one who was pleased, since there were two mousies in the box. Their excitement was so infectious, that Tuck ran over and started playing with one of his toys, too. I decided to make a curry for dinner yesterday and though that it might work well to do it in the crockpot, especially since curries do particularly well when they're given plenty of time for the flavors to meld. We'd gotten a head of cauliflower especially to make a curry, and David thought it might be a good idea to use a big golden beet I got in it, since he's not that fond of beets but likes curries. He also suggested using seitan in it as a protein. It turned out quite tasty, especially served over basmati rice. It was also super easy. I chopped up the cauliflower, a large onion, and the peeled beet, put in about three tablespoons of curry paste, a couple tablespoons of cashew butter, a can of coconut milk, and a big (20 oz.?) can of diced tomatoes, then set the crockpot on high and let it simmer for about 8 hours. I think I stirred it twice. It doesn't look like much liquid at first, but it cooks down very nicely without any additional water added. Try it!

Thanks to a tip from VUBOQ, I've also been saving up vegetable scraps for the past few weeks and last night put them in a pot with water and cooked them down into yummy broth. These simmered for about 4 or 5 hours before I strained out the scraps, then added salt and simmered it for another few hours to make a nice, rich bouillion. I'm not sure what it'll get used in, but I'm sure it'll be tasty.
Posted by Mel at 7:41 PM

Happy Blogiversary! Glad the kitties liked the ugly mice. I sometimes freeze veg scraps and boil them down...

Happy blogiversary! Wow, that's some kinda hard lovin' there, decimating the toys in a single evening!

I need a better picture of the kitty toys. Can we pry them away when the kitties are passed out? It looks like the kitty tacos but are there little bits of yarn sticking out? My Suki must have one!

to thebunny - the cat toy is a triangle of knitted fabric, folded over, sewed together on one side, stuffed with premium catnip, and sewed together on the other side. I make these for my cat kids all the time.

even little tuck gets in on the fun (no catnip involved there)!

I love the picture with all three of your "kids" looking in the box :-)

Happy Blogiversary!! It's nice to have met you here and face to face, too. Your soup looks so tasty!

ps, the curry looks delicious- and reading about how you made it made my mouth water!

Happy Blogiversary! That picture of all the kids inspecting the box is just the best. How nice it must be to have furry roommates who don't want to kill each other when they get that close... :)

The time goes so fast, doesn't it?

Happy Blog Birthday! I love the doggy in sweater shot the best of all the kids' fun! very cute.

SO, the real question is how much yarn are you bringing on your trip to India? An extra bag's worth or are you able to pack really well? Sure glad yarn is so smooshy. :)

Happy happy! And thanks for the curry recipe. I always use the japanese curry cubes, the extra hot ones if I can get them. I've got to try VUBOQ's broth too.

found you via cutewithchris... you have my dream pet family: 2 kitties and a tan frenchie! i have the two cat part down pat and hope to one day find a frenchie that needs rescuing...

oh, and that curry looks downright amazing. i will have to try it soon.

hey Mel, you are famous AGAIN! Check it out HERE.

And belated congrats on your blogiversary.

And by the way, Mel, I always meant to say to you: You are NOT a bitch, and please don't go to hell.