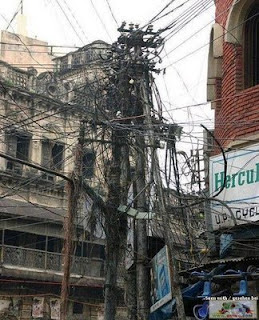 A couple of weeks ago, I read this article in the New Yorker by Atul Gawande (an associated podcast can be found here). The primary case he discusses in the article is that of a woman with chronic & severe itching, but the main thrust is about how much we don't yet understand about how the brain functions and what happens when its sensory mechanisms go haywire.

This is basically what is happening to people such as myself who deal with fibromyalgia pain and restless legs syndrome. The off switches for certain sensory pathways stop working properly, so we feel pain (or a crawling sensation in our legs) when there is no physical reason for that sensation. Sometimes, as in my particular situation, we even have abnormal motor activity, also - meaning that my limbs move involuntarily, thankfully only when I'm asleep. And nobody really knows why that occurs or how to go about repairing that faulty wiring, which is frustrating as all hell.

Fortunately, despite our lack of insight into the mechanisms, there have been some advances made over the last several years in terms of treatment. Unfortunately, the treatments carry their own set of problems. For over a year now, I have been on ropinirole for the restless legs and periodic limb movement (the twitching in my sleep thing). The problem is that eventually the brain gets accustomed to the dose and the problems start recurring, requiring higher doses.

The other problem is that this particular drug attaches to dopamine receptors, which is one of the pathways stimulated (via a slightly different mechanism) by amphetamines. So as the dose gets higher, you run a greater likelihood that the drug, rather than helping, will actually start to ramp up the problem by causing excessive stimulation. Oh, and did I mention the nausea? Yeah, really.

Fortunately for me, I've been on a really low dose, so my recent need to increase the dose isn't likely to run me into too much trouble. Even though the higher dose seems to be managing the restless legs part of the equation, though, I've still not been getting very restful sleep lately, likely because of the fibromyalgia pain. My irregular schedule doesn't really help, either, but for the moment I'm focusing on the things I can change easily, and that's not one of them.

To that end, I sat down with one of the physician's assistants at my local family practice today to get a prescription for gabapentin. This drug has been around for a while now as an anti-epileptic. It's newer cousin, Lyrica, is labeled for treating fibro pain.

Gabapentin won't be labeled for this, since it went generic a few years ago and there's no financial incentive to do the research, but the National Institute of Arthritis, Musculoskeletal and Skin Diseases (NIAMS) published a study last year that found it to be effective for this purpose. It's also been shown to help with restless legs. Since, as a generic, I can get it for a much lower copay than the Lyrica, this is a good thing.

The downside - because of course there had to be one - is that it can cause problems with concentration and it causes physical dependency. Those are probably the top two reasons I've avoided trying it before, but I finally decided that putting up with the pain and the lack of sleep was probably the worse option of the two. Of course, on the label it says that I should be wearing a medical ID bracelet saying I'm taking it, which is not particularly reassuring, strangely enough. I shall, however, soldier on and hope that it does some good.

Oh, and I also somehow managed to bugger up my bad knee while mowing the lawn the other day. Good times, I tell ya.
Posted by Mel at 3:40 AM

chronic pain makes you very miserable - so I hope the new medicine helps! I find it's always helpful to have something to be looking forward to - a small thing, a new book, or in your case, new wool; going out for coffee, whatever, Just something to focus on.

Mel, DH the acupuncturist tells me that both those problems can be helped by acupuncture. If you have not explored that already, you might want to try it out.

The bad side is due to heavy lobbying by Big Pharma and AMA, acupuncture is generally not part of the third party/insurance system. the IRS does consider it a valid medical expense, so you can lump it in with all your medical expenses when you itemize.

Good luck with managing your symptoms. I hope you feel better and get a good night's sleep soon.
Phyllis

I hope the new medication helps!

Yucky. I hope it works, at least.

And I had a conversation recently with someone who has recently qualified as a hypnotherapist. he was talking about pain control/relief in that context. I think it has something to do with training your brain to ignore those meaningless pain signals (meaningless in teh sense that there is nothing you can do to deal with it). Have you ever looked into that?

Good luck with the new meds! I'd be interested to hear how you fare with it. It's an option that my MD's presented (off label, too) for a neurological vision problem.

Sorry those restless legs are driving you crazy. I thought of you the other day while reading a magazine article that said a daily drink of gin and tonic could help...seriously...not a joke. Guess you could try it, huh?
Aunt Fran

Good luck. 2 of my kids have been diagnosed with something called sensory integration disorder, which sounds like it might be a cousin to what you experience. It has to do with them having oversensitivity in certain ways (e.g. noise that normally would be considered background noise, like the hum of an airconditioner, is perceived as being excessively noisy or distracting; labels in clothing that wouldn't bother most people feel like they are made of steel wool to the kid) and undersensitivity in other ways (they aren't aware of their body's position in space relative to other objects and so seem clumsy, they like physical sensations like swinging that would seem too hard or vigorous to most kids). It's shocking how much we DON'T yet know about the brain. The curious part of me wonders if you had any of the signs of sensory integration issues as a kid -- or even as an adult. I find that Tom and I both exhibit very very mild versions of some of the symptoms that were writ large in the kids.

I found that my sensory issues (extreme tactile defensiveness and the fun motor tics when I sleep) were helped when I started the meds for ADD. I'd held off on that for years, but now find that stimulant medication really does make for better living. (Concerta also works on the dopamine receptors and prevents the re-uptake effect) The downside, though, is exactly what you said. The dose needs to be upped if I don't take periodic med holidays.

And good golly Miss Molly, am I fun to be around when I'm off the meds! Wheeeeeee! I have all sorts of great ideas...

Ugh, sorry for ya, really. Not quite the 'growing old' issues... for which I tell people 'beats the alternative' (being 6 feet under or ashes on the wind). A coworker's daughter has same as Carol's kids and as part of treatment they rub her down with a particular plastic brush. Really is calming. No idea why though.

the fact that some of all work on dopamine circuits is pretty interesting. I'm sure you're familiar with the parkinson's<-->schizophrenia relationship, particularly around treatment. not suggesting that that's *specifically* relevant to what you've got to deal with at all, but I think that that its rather interesting, how the neuroleptics are dopamine antagonists and basically cause tic-like side effects, and how too much parkinsons's meds cause you to hallucinate if you don't dose right. Again, mostly as a "isn't biology cool," rather than as something that might be in any way useful to your process, because I'm you know just a guy, whose taken one to many biology and psychology classes, and not actually a doctor. :-o

Also the amphetamine/concentration/ADD (particularly what some people have said about SI stuff) angle is pretty interesting as well. Again, I'm not sure if I can add anything useful, but I do find it interesting.

My fibro pain has to be managed the same way I manage most of the arthritis pain: a combination of Advil and Lamaze relaxation techniques. The other thing that helps, a lot, is tonic water--that's why the "gin and tonic" cure is often offered! There's more quinine in a glass of tonic than in a quinine tablet--I looked it up--and that really does help the massive leg cramps I get. You might try it, with or without the gin!

I'm so sorry you have to deal with chronic pain. My friend's daughter is just dehabilitated with migraines to the point where she is in the hospital more than she's out and on LOTS of pain meds. I've often wondered if I could cope as well as she has. I can't even imagine. I'm a wuss.
Hang in there. ((Hugs))

Tonic water for restless legs, eh? I'll have to give that a try. I find that magnesium taken just before bed can help, others swear by iron.
Good luck with your new meds.

I read that article last week too. How difficult to live with something like that. That part where the man scratches right through to his carotid . . . yikes.