One of the big discussions we've been having is over footwear for the wedding. The concept has been to go with something dressy casual, since we're not planning on formal wear clothes. David's found a very nice pair of loafers here.

I had initially thought to wear ghillie brogues (for a better pic, check out the ones modeled by James's cousin here), since they're sort of considered standard with kilts, but they tend towards the ornate and formal, which doesn't really fit the look we're shooting for. Since I'm wearing an 18th century-style kilt, the other option was to go with period buckle shoes comme celles-ci. Just a little too Plymouth Rock, though.

So I decided to turn to Doc Martens and see what they had to offer. I came up with these three options, which arrived today: 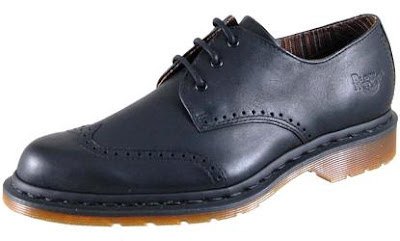 The stripped down, basic brogue 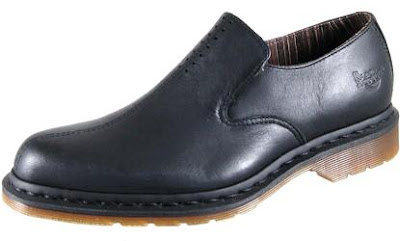 The hip and edgy slip-on 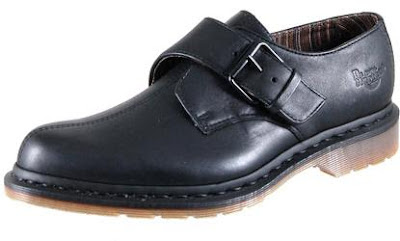 The new and improved buckle shoe

I didn't specifically go into this looking for shoes that were so similar, so it was interesting to see how directed my tastes were - same basic outline and even the same lining for all three of these styles. I'd love to keep all of these because they all look fabulous, but I need to narrow the decision down to just one. I think David and I are pretty firmly in agreement on the one we like best, but I thought I'd throw it out to the rest of y'all to see what everyone else thinks. So go vote already!


FYI: If you can't see the poll just above, check to make sure you have the latest version of Java installed and enabled.
Posted by Mel at 1:40 AM

I think the 'hip and edgy' looks slightly 'sus and dodgy'. So I didn't vote for that.

While I am in general favor of slip on shoes, in this case, for this event, I think the slip-on would look too much like a slipper. Of course, I am still in favor of you going for an all out brogue. Live it up!

MEL! I voted for the sudued buckle and on seeing the results so far am worried, are folks envisoning the kilt part? The laces just don't seem to fit as will with the buckle shoe(buckle is small enough to steer clear of pilgram/plymouth rock). PS I like wearing shoes like the slip-on ones but did not vote those in.

I actually lurve all three ... but maybe for a wedding the basic brogue? although i have a soft spot in my heart for all shoes with buckles.

I love the new and improved buckle shoes!

I want to see the rest of what you'll be wearing before deciding.

But based on what little you've said, I'm kinda leaning towards the buckle shoes. Though I also like the basic brogue.

Since I am lazy about shoes and like to kick them off as easily (and frequently) as possible, I went for the slip on (for lots of use after the wedding)... but otherwise I'd go for the buckle because I'm a sucker for those too. But the brogue is good too. Really, I did actually vote for just ONE.

I voted for the hip and edgy slip-on but I wish there was a choice to vote for the one that is the most comfortable. That is my vote. Besides everyone will be looking at the handsome couple!

I am a Scot. And I'm going with the New and Improved Buckle shoe. Mostly because I really want a pair...

(Being Scottish has nothing whatsoever to do with it, but I thought it would give my argument some validity.)

The brogue, of course. I'm saying this because it is the most like the traditional brogue you linked to, but also I'm saying this as a woman with high arches and narrow heels who always should, but doesn't always, choose a lace-up shoe. Most supportive and long-lasting, too.

I'm voting for the buckle shoe. That said, purchase what ever shoe you are most likely to wear again. You are going to have them for a long time.

I like them all, but when I visualize them with a kilt, I think of the lace-up.

It's like you're a boy version of the mafia. Wow.

I have little to say about boy shoes, but if you're shoe shopping, it must be getting close! Congrats!