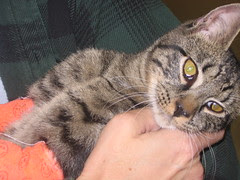 David tells me this one's name is Cougar. His left leg appears ready to have the splint off, and I'm thinking to bring him home with me this weekend. He didn't tell me that this one (born last week) is Haylex. I had to find out from Val. And I decided that this one is Lakshmi. That's her half-sister Sibri behind her (Haylex is their first cousin). We're going to try for a full sister for next year.

In the Full of the Moon

Technically last night was still waxing gibbous at 98% of full that's apparently close enough for jazz. Last spring (maybe summer, actually, but you get the general idea), some folks at Colorado State's vet school had a study published showing a small but significant uptick in visits to their emergency service during the full moon, and that certainly seemed to be the case here last night. I'm exhausted and ate far too much chocolate in an effort to retain my sanity. A nap before driving home is going to be in order.

This, of course, was after waking up earlier than planned and getting a call from the ladies as soon as I rolled out of bed to come look at their old mama goat, who wasn't doing well. So I went over to examine her and determined that she needed to go see their regular large animal person, who has the facilities to hospitalize, then gave her some Banamine to make her more comfortable in the meantime.

And then David was having fits because Earthlink decided he'd used his allotted bandwidth for the next month and shut his business site down - for the next three weeks. I'd gently told him before that he really needed to find a better hosting option, but tech things scare him and he's had more pressing matters. His office manager is equally tech-phobic and was all ready to go with bundled service through Comcast at a ridiculous cost. Thanks to knitnzu (who blogged about it) and Steph (whom I e-mailed), they're exploring considerably saner and cheaper options and will hopefully get something resolved quickly.

Note to Elizabeth: Yes, we do still have some herd yarn, but your comment didn't give me an e-mail address to respond to and your profile isn't public. Um, scratch that, as I seem to be able to access it now. Anyone else who might be interested, though, can e-mail me at mel dot vassey at gmail dot com.
Posted by Mel at 7:28 AM

UGH, technology. It gives me gas! Hang in there! We can't beat it but there are better/other services. Try Bluehost. They're who I use for work and personal use.

What beautiful babies! Lovely names, too!

Your alpacas are just too sweet!

Nice to meet you this weekend.

The babies are so sweet! I especially love the little white face on Haylex.

I'm so happy that Cougar will soon be in a nice loving home :)

Cougar??? That sweet, little snuggle-bunny is a Cougar? But he certainly does have a great deal of strength to have come this far. I suppose Cougar could work nicely...

Hope that David resolves his hosting issues soon. How ridiculous to find your business hobbled by such a silly thing!!!! Glad that there are some folks out there ready to help.

Yeah, David, move, and soon! Pete at IHS is FABulous! Susan (of 'I'm knitting as fast as I can') is who first mentioned IHS on her blog. Will the kitty be Cougah? Love Haylex's white face-so stunning. The fool moon thing? YUP. I worked a bar (well beer, wine, sandwiches, etc in a cellar!) outside of Syracuse University (Hungry Charlie's for anybody who'd know) for several years. The full moon nights were always a bit nuts, especially when they fell on a Friday night. Once I think the Grateful Dead concert was on or near a full moon....hmmm, crazy cosmic things, end of the week, university, deadheads, drinking, drugs, could it get any nuttier?

This full-moon thing is interesting. At the office, when we get a run of people who are acting ... um ... strangely(?) we try to figure out why. Looking to see if the moon is full was the last thing we did. Now it's the first.

Anyone who thinks that a full moon doesn't affect people needs to come work in my office for a year. I know, I know: scientists tell us that full moons don't affect people. So I wish they'd explain why some people get loopy when the moon is full.

good morning! I just happened on your blog site and when trying to get to Red Maple Sportswear (after seeing the name on "kilted" Joe's blog), got the awful message of "try again at the beginning of the month". I hope that David makes some changes soon about "hosts". Great finding you!

OH I love your friend's picture of you & David too! And the kilt? Oh you are rocking that look! It sounds like you survived the stress and had a great time at Rhinebeck. Good luck to David!