Cobwebs (and I Don't Mean Lace)

We have a little problem with spiders in our house. Around this time of year, we're pretty well overrun with them. No black widows or brown recluses or anything like that - Maine's not big on poisonous critters - but enough of them to be rather a bit of a nuisance. Especially when a trip to the cellar is necessary. Now, I am really rather fond of spiders and most people who know me have heard me say at some point, "Spiders are our friends". Sometimes, though, you need your friends to go away for a while. We'd put up with this situation for quite some time, but I decided that today was the day to armor up and do battle. It was long and arduous, but I think I was ultimately successful. Because all the surfaces I had propped the camera against to snap the before photos were dripping with noxious chemicals, there are no after pics. And the respirator thing? I know that there are some folks who get turned on by such things. As a claustrophobe, I am not one of them. While I am very glad I had it for this project, it stayed on not one second longer than it had to.

Like a lot of folks, I like monitoring traffic to this little blog and seeing what search terms bring people here. My little tutorial on sherman short rows continues to be a popular search, as do "thistle tattoos", "tricot machine lyrics", and "fox poo". I know a lot of you probably have a hard time believing that last one, but apparently there are folks out there who can't get enough of it (and in case you've been wondering, the fox marked the mulch pile again just last week).

The other day, though, I had one that I had not seen before. Someone in or near Buffalo, NY, did a search for "liz vassey's legs". Liz happens to be my cousin. This is her IMDB photo: 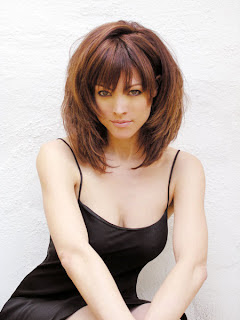 If you watch CSI, then you may recognize her as the actor who plays Wendy Simms. Since we don't generally watch television and since we don't get any CBS station here, I've never seen her in this role. In fact, the thought of someone coming to this blog to find out about her is pretty funny, since I haven't seen her in 26 years, since the summer she turned 9. My father's family, unfortunately, is quite spread out, so there are a lot of relatives on that side that I rarely see.

Even funnier, though, is that when you do a Google search for "liz vassey's legs", the very first page returned is this one.

...I haven't been knitting, there has been a good bit of that going on around here, as well. I've been trying to sort out adapting Stephen's Brâncuşi stitch pattern to kilt hose. I think I've pretty well got it, so a few gauge calculations and I should be in business with that one for real. Also, work continues on the Diamond Fantasy shawl, but as it's unblocked lace and we all know what unblocked lace looks like, there won't be any progress photos for a while, I don't think. As for the wedding vest, I just need to order the yarn and get going on that one.
Posted by Mel at 3:19 AM

I just found your blog, I like hearing about the Alpacas!

This might be a dumb question, but how do you know the serches people use to find your blog??

I'm a big fan of spiders and find them endlessly fascinating, although I draw the line when they start taking up more space than I do in my house.

As long as it's not a rodent or a bat (also, one of our insect-eating "friends"), I can have a lot of tolerance.

I do have to say, that breathing apparatus makes you look even hotter than usual.

Ya know... if you just sweep the cellar ceilings every now and then... (we get to it every couple of years). Regarding the recluse... my friend's MIL lost her leg to one, and she's in ME. Charlene Donohue (entomologist w/ ME For Svc) says no way, but did she see the necrotic tissue? MIL sat here in hosp. for 3 or so days before she got sent to Boston, where on one look the doc said, recluse bite. I'm w/ you regarding respirators. That liz vassey leg post is hilarious, little dog legs? Beautiful actress legs? All the same to the search engine. The brancusi pattern is great-very masculine (some of the patterns aren't-quite).

Spiders are not your friends. No. They will bite you. Even if you make a deal with them that entails their staying on the ceiling and being allowed to live, they will break it. Spiders are sneaky and mean-tempered. The whole Charlotte's Web thing was nothing short of propaganda.

What the???? Liz is so far from a dog it's almost funny. Google is a strange beast.

I'm still laughing about what comes up under that search term. So funny!

Spiders eat moths. Moths are the tiny minions of Sstan (Satan's cousin). Therefore spiders are our friends. But who wants to have 200 of their closest friends over all at once? Not me.

And yeah, that respirator look is a good one. I may try it.

I can't decide which photo is hotter - the one of that lovely dog or your cousin! But it's hilarious that your page should show up first.

If I ask nicely, will you bring your respirator and spider gear to my garage and take care of my black widows? Pretty please? I have only once seen one actually in the house, but it was in the baby's crib--major freakout! But then, I'm in California, not Maine, so of course we also have the brown recluses and the violin spiders. Ewwww!

OK, I like spiders, but you did have rather a lot down there.

Instead of chemicals, why didn't you just use a vacuum cleaner to remove them (and any dust and other bugs that might have been hanging around)?

An extra long cable, a couple of extra bags for the machine, about the same amount of time, but no gas mask necessary.

Regarding "Liz Vassey's Legs", what likely happened was that a recently aired CSI program, "The Chick Chop Flick Shop", featured Liz in a couple of scenes wearing a very short skirt and heels which should have prompted any leg man worth his salt to race for his computer to run an image check. She's a welcome addition to the seeries.