A Weekend in the Woods

We had a really nice couple of days camping with my folks up on Moosehead Lake. I hadn't been up there in years and David had never been there. My parents usually drive up a few times a year to take pictures of moose, but none of us had ever camped at Lily Bay State Park, where we had reserved a campsite. No knitting occurred while we were there, but shortly after we set out I finished up my first Dulaan item for 2008. The park is just about as lovely as you could imagine and, with the exception of one heavy thundershower that swept a good bit of mud under our tent, the weather was wonderful. An added bonus for David was the chance to indulge his pyromania and sit by a campfire both nights. He also got in a kayak for the first time ever and did a bit of paddling around, but I don't have any photos of the event. I do have this one, though. The moose were fairly elusive this trip. We saw one just before we got to Greenville Thursday evening, when it was too dark to get a decent photo, and then I managed to get this one of a smallish (as in, around 600-700 pounds small) cow moose. She looked relatively young, so I'm guessing she was one of last year's babies.

Coming home, we swung out to Jackman, which is near the Quebec border, in hopes of seeing more moose. The moose hunt proved fruitless, but there were still some wonderful sights to be seen, like this overlook view of Attean Lake as the storm clouds rolled over the mountains. As fun as it is to go camping, I definitely need to figure out something better for my back to sleep on. We tried an air mattress this time, but I'm not sure that it's any better than the camping pads we already have (aside from keeping us drier after the deluge). I may just need to get thick foam pads and sew covers for them. At least I was able to come home and get a reasonably good night's sleep before returning to work.

The doctor felt that the problem is one of patellofemoral syndrome, which is supported by the fact that x-ray films of the joint were quite clean. So I started seeing a physical therapist to see what we can do about it, and he feels that strengthening the vastus medialis muscle should do the trick.

I actually got a call from the physical therapy office Thursday as I was trying to pull things together for the camping trip that they'd had a last minute cancellation and had an opening in half an hour. Since my only other option was to wait until late August, I jumped on it and got a series of exercises to work on. I was admittedly not as diligent with them as I should have been over the weekend, but there wasn't always a good place and time in the woods. My next visit is this afternoon, so we'll see how it goes.

This particular bit of silliness comes courtesy of Jean. She had the link, and so naturally I followed. I'm not sure if we'll see The Simpsons movie before it hits Netflix, but we both really like the show. Anyway, I think it's a rather good resemblance, for a cartoon character. 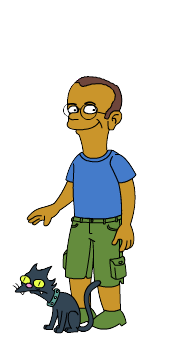 Great pictures! I haven't been "up Moosehead" since I was a kid. Had some good times back when the idea of sleeping outside wasn't completely horrifying to me...

It's very sad but I have never actually seen a moose. :-(

Hey, that's the muscle that I'm having to strengthen too! I was very diligent with my exercises for the first three weeks and it made a huge difference. So I was in no more pain and stopped doing them.

I suddenly have a sense of impending doom.

Very sweet picture of you and David. Now to get David Simpsonized.

GL with the knee stuff - so much can go wrong with a knee, but sounds like you're on target --

We (son and I) saw the movie on Saturday, in part for me to escape the oppressive heat! Fun, but if you're busy it can surely wait. He did have me create a Simpson's avatar. I have to figure out the new blog, maybe I'll put it up... like yours, mine kind of looks like me. That VMO is the hardest of the quads to target... let me know if you want a couple of extra exercises...

we saw "the simpsons" this weekend. if you like and understand the tv show, you will love the movie.

stick around for the credits, though.

We use an aero-bed for camping (we camp aLOT)--- one of the ones at "real bed" height. Alot of my back pain was coming from being so close to the ground (i.e. cold uncomfy ground)... this helped immensely. Not practical for a walk-in site, but for car camping-- a great thing!

Saw this regarding Dulaan, thought I'd pass it on:
http://www.nwkniterati.com/movabletype/archives/MossyCottage/001797.html

Great picture of you and David!

I love Moosehead and Greenville, although I haven't been in several years. My mother used to have a lovely camp on the lake in Greenville Jct. and it was perfect, but they sold it and winterized their camp on Schoodic lake (lovely camp, not nearly as nice an area unless you like driving 1/2 hour to get 6 miles down the camp road).