Photos (And Tinking) Ahead

First of all, there's my sister's mystery birthday present. Here it is on the recipient. Apparently it arrived, very opportunely, just in time for a sleet storm. I was very pleased with how this turned out and should probably sit down and write out the pattern. 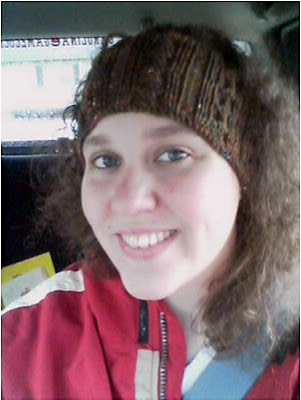 Then there's a progress report on the sweater. I finished the lower body... ...and started on the first sleeve. Now, I don't expect anyone to be able to pick this out, particularly from this small photo, but I was having some problems with this sleeve. The short seed stitch cuff worked out great, and I owe JoVE for that suggestion. Since this is supposed to be a comfy sweater, I didn't want ribbing, and this doesn't bind and is still stretchy.

No, the problem was all my own doing and it had to do with the increases. I was a bit inattentive early on and for the first two or three increase rounds, my right-leaning M1's were twisted (as are many right-leaning things, but I digress) because I didn't knit through the back loop. And on one of the increase rounds I made either two right-leaning or two left-leaning M1's. Now, I know this is not a huge deal - they're on the underside of the sleeve where nobody is likely to look, and who'd notice anyway?

Well, I, for one, would notice. And as I thought about it, I realized that what was now a niggling irritant would, by the time I started the second sleeve, become a nagging one, and by the time the sweater was finished, it would haunt me like The Telltale Heart. I'd walk up to strangers on the street, lift my sleeve, and yell, "Villains! Dissemble no more! Here, here! It is the improper leaning of its hideous increases!"

This, I decided, would not do.

So I picked up the stitches just above the cuff... You will note that I decided to go magic loop for this redo. The wood needles at relatively tight gauge were hurting my hands. It didn't help that all I had when I cast on was a set of Clover dpn's. By the time I got to my LYS this morning and switched them out for some Brittanys, the damage was done. I find the cables annoying with magic loop, but at least I get to use my Addis. And with those corrections made, I was able to get back to where I had been in very short order. Much better. And yes, I'm giving my hands a little rest.
Posted by Mel at 2:54 AM

Mel, sorry to read about your sleeping problems on Jan 20. I know you would prefer not to take medication, but have you tried Dothiepin? It is the generic name of one of the old-fashioned antidepressants, no longer used as such, but I am finding 25mg nocte very effective for a good night's sleep. Would be interested to hear your thoughts on it.

Just have a couple of drinks and you won't notice. Or hear that telltale beating. I have learned to consider some of these 'problems' creative design elements. I wonder, if the left increases were twisted, would it bother you so much.

Sweater looks good. I know what you mean about The Telltale Heart: Ijust ripped back something 2 times in the same night because I couldn't bear the loopy stitches that weren't pulled tightly enough and the inartful decrease. I like the color of the NatureWool, too. Will it match your eyes?

p.s. i wish you were my brother. and not just because you give beautiful gifts.

And now I'm going to die laughing every time I see that sweater because it talks like Edgar Allan Poe writes. Next time I see you at a festival, if you're wearing that sweater, please don't think I'm nuts if I kind of lean in and look like I might be listening for other possible secrets the sweater might tell...

Oh, do write up the pattern for the headband! I love knitting those. They go fairly quickly and look great...even on my little pinhead!

Happy sweater knitting! I'm thinking that you did the right thing in ripping back. No sense having an overly dramatic sweater!!

Oh, you are right! I spotted those errant-leaning increases immediately, and wondered what was going on! Man, was I glad to read later that you decided to correct them -- I couldn't stand it, knowing they were there, forever, mocking me, pointedly showing themselves to everyone...

Yes, you did the right thing! I feel much better now. Much better.