I got the call this morning that my maternal grandfather had passed away in his sleep overnight, two days after his 97th birthday. I had been hoping to get to South Carolina to visit him sometime this winter, as I knew that his body was beginning to fail. My mother hadn't expected him to survive through another year and had just gone down there for an extended stay. It sounds as though he passed shortly before she found him this morning, pretty much as she had put him to bed last night.

I've always felt exceptionally fortunate that all of my grandparents survived well into my adulthood. None of them was famous or particularly known outside of their respective families and communities, but within their realm and within my life, they've been nothing short of monumental. Their presence in my life has always been something I've treasured deeply.

My Granddaddy, Ervin Merchant, was born in 1915 to George and Lessie Baird Merchant. He was 14 when the Great Depression hit and ended his formal schooling, as he and his brothers had to work to help keep the family afloat. He worked for quite a long time as a buyer for the large timber companies, and I remember riding with him as a small child as he paid his work crew, using an old pull lever adding machine to  calculate their wages. As a second career he worked as a driver for the state home for the mentally handicapped, and throughout both those careers, he and my grandmother maintained a farm to feed the family.

Along the way, he and my grandmother raised four kids, became fairly comfortably middle class, traveled the country, built themselves a vacation cabin in the North Carolina mountains, and generally lived the American Dream. Although he spent his entire 97 years living within just a few miles' radius of where he was born, he was most definitely a larger than life person. He could be stubborn as a mule and twice as tough, but he was a fundamentally kind and fair-minded person, and I never heard anyone speak ill of him.

Although we're all feeling a sense of loss, his mind had decompensated badly after my grandmother's death a year and a half ago. I think that escaping in the lost corners of his mind was the only way he could get some temporary respite from his grief, though I don't think it gave him much comfort in the end. Her loss was devastating, and he wasn't able to recover from it. As difficult as it was for the rest of the family to deal with, for him it seemed like pure anguish trying to hold the mental demons at bay while he waited for his body to give out. And for as sad as it is to lose him, there's a definite relief that he can finally have some peace. 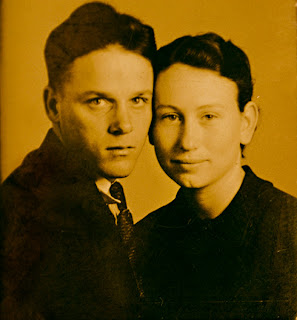 Mel, I am very sorry to read this. But I am glad you got to spend so many years with your grandparents, I always wished I had known my maternal grandfather better (he died when I was 9). XO

I love this, Mel. Thank you so much for posting it. I most liked the reminder that though a person may not be famous to the world, they are the world to those in their family. And that living a good, honest, life and being respected for that is immeasurable. You're in my thoughts...

Sorry for your loss Mel. Your words ring true. My grandparents, too, hold such great value in my life, even those that I have lost. Their wisdom drives me to be stronger, to see the world through different eyes, to be proud of what I have, and to never forget the past. Thanks.

I'm so sorry for your loss, and so happy that you knew all your grandparents. My own kids never knew my parents. Grandparents are a link to our history.

kmkat: They very much are, and it's one of the reasons I'm so glad for all the time I've had with my grandparents. There's simply no way that my parents could have remembered and passed on all the stories my grandparents had to tell. I also knew all of my great-grandmothers and the great-grandfather whose name I share. There's simply no way to put a value on a treasure like that.

Hugs to you, your mom, your brother, and the rest of your family Mel.

Death is always hard, but it seems there was a lot of grace around your grandfather's.

So sorry for your loss!

So sorry for your loss, Mel. This is a lovely tribute to your grandfather. You are indeed very fortunate to have had your grandparents for so long!