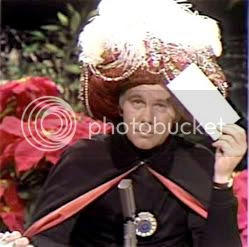 One of the interesting aspects of my relationship with David is that we often have the same thoughts at the same moment. And when I say often, I mean at least on a daily basis. Maybe it's a psychic bond, maybe it's just having very similar frames of reference, but it's been that way through the entire relationship.

Lately we've been watching old episodes of "The X-Files", thanks to Netflix. Earlier tonight, we were watching an episode where animals in an Idaho zoo were apparently being abducted from their cages by aliens but then not being put back in quite the right location afterward and wreaking havoc on the local population.

One of the animals was a tiger who ended up in a warehouse across town. As our intrepid FBI agents arrived on the scene, Scully said to Mulder, "How does a tiger get all the way on the other side of town without being spotted?"

David and I both immediately yelled at the TV, "Because it's striped!"
Posted by Mel at 4:15 AM

My own David and I do that, too. We usually say, "Hey, get out of my head! Only room for one in here!"

Except lately, we've been saying that in unison.

Mayhaps because you're both a little geeky?? (not that I am, not one little bit)

Shades of Neddie Seagoon, in his leopardskin coat........

haha, i love that! it's cool when that happens.

i'm single, but i have the same thing with my friend ruben.

Very nice!!! You two are connected!

Harry and I do this too. It's scary sometimes.

We do the thing where one of us says, "Did you hear about--?" and the other says, "Yes, wasn't that awful?"

i liked the ending line..