It looks like the farm will soon become the new home for this pair. 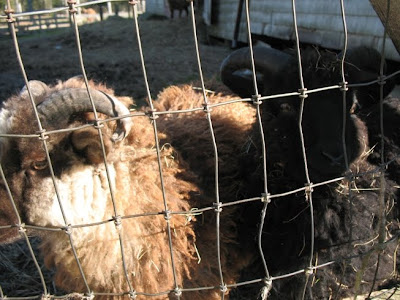 Malaga, the last goat on the farm, is now 13½ years old and pretty severely arthritic, so even though he's in fairly good spirits at the moment, it's all but a certainty that he won't survive another winter. The problem with losing him is that Posey, the resident Shetland ewe, would be all alone, which is generally not good for sheepies, even primitive breeds like Shetlands that don't have as strong a herding instinct.

So Paula and I talked about it a bit, I did some asking around, and I found this pair of young Shetland wethers who were otherwise destined for the freezer, which is the fate of most ram lambs. Then there were negotiations with Wendy, who was pretty adamantly opposed until she saw their photos, and we have pretty much hammered out an agreement by which I will take over farm chores a couple of weekends a year so that Wendy and Paula can completely get away. I'll likely plan it so that I take time off those weekends, too, which will be like a mini-staycation for me since I never have a weekend fully away from work, either.

On Saturday, I drove up the coast after work to do a proper pre-purchase exam and get poop and blood samples to make sure there aren't any disease concerns that might be a problem for the 'pacas. I also came home with a few locks that we had to clip to do the blood draws, so I washed them up and just spun up about 9 yds of very lovely 2-ply laceweight from the brown fellow (whose color, I believe, is more accurately mooskit). I've got slightly less from the black one and will spin that up later, but I expect it to be every bit as nice.

Oh, and in case you were wondering, yes they are every bit as adorable as they look in the photo. They're 5 months old and weigh maybe 25-30 pounds tops. It was all I could do not to squee when I saw them. Here's another pic of them in the field with the resident ginger tom (who's maybe 13 pounds) hanging out with them for size comparison. 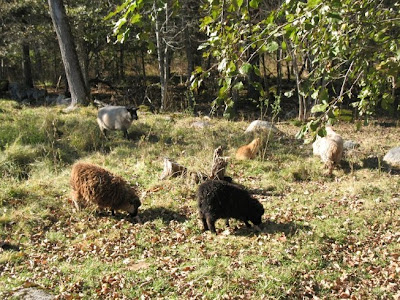 OMG, they are so sweet! I especially love the black one (I have a soft spot for black sheep). When will they come to live with you?

Ooh, you get to keep them, that's so exciting!

Aw, that's so neat. Will the horns stay?

Yay for new sheepies!!!! And very cute sheepies they are, too. You are a lucky Sheepie Daddy!