She told me her name is Grace and her brother's name is Will. Her parents, apparently, watch way too much TV.
Posted by Mel at 1:47 AM 5 comments:

My friend Daphne passed away Sunday morning. It was not unexpected, as she'd been diagnosed with pancreatic cancer over a year ago, but she had a relatively slowly-progressing case and had done reasonably well for quite some time. Word came from her sister Sheila a week ago that Daphne had decided it was time to stop eating. She had struggled with nausea caused by the cancer for months, but she had finally had enough and made the decision to go on her own terms.

At the time of her diagnosis last year, I was particularly worried that she would not survive or be healthy enough to attend my and David's wedding the following June. Pancreatic carcinomas are notoriously nasty cancers, and hers was invasive enough by the time it was found that it was inoperable. We felt very fortunate that she was, ultimately, able to be there, as she was instrumental in our finding the venue for the wedding (see this post). Also, the B&B where the wedding party stayed and where we held the reception used to be a cabin owned by her father.

Daphne had cerebral palsy and fairly severe scoliosis, but she never slowed down. She sang in choirs, lived very independently, led an active social life, served on the board of the chapel where David and I got married, and for many years was the postmistress for the seasonal post office serving the little summer colony where she was one of the few year-round residents. I knew her for several years from a Maine lgbt listserv but didn't meet her in person for the first time until just a few years ago. She was the kind of spirit, though, who really made an impression on everyone around her, and the world is ever so much better for having had her in it.

Here's a photo of Daphne from this past July taken at a get-together that I wasn't able to attend, as it was just a couple weeks after the wedding. She was nearly 11 months post-diagnosis at this point and had lost quite a bit of weight, but the joy that made her such a treasure to know is still so clear. She will be missed, but she'll live on in the hearts of all she touched, which is the best possible tribute to her life. 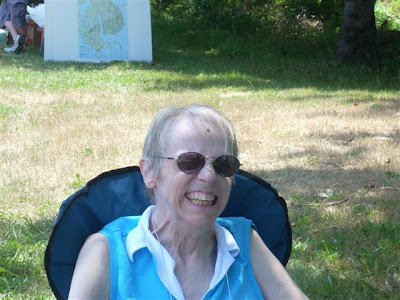 If you want to read a bit more about Daphne and another life she touched, Mary-Helen also has a lovely tribute to her.
Posted by Mel at 10:33 AM Anyway, I got this one after I got up from my desk chair. Tuck likes to sleep on a blankie under my desk, but he always jumps up whenever I go anywhere, whether he's quite awake or not. It's pretty obvious from this shot that this time fell into the "not" category. Which, of course, just makes me want to smooch him.
Posted by Mel at 7:07 AM 10 comments:

Interesting searches which have brought people to my blog this week:

- An msn.com search for "titty jiggel"[sic], which led someone to this post.

- A Google image search for "wonder woman's butt", which led someone to this post.

What surprises me about the last one is that GayProf's blog didn't come up at all.
Posted by Mel at 3:49 AM 3 comments: You just cannot imagine how much I love this little face (even though he's about to shoot a laser out of his left eye). It's late and nearly time for bed, so I'm not going to expound on the other night's results too much. I'm sure it will come as no surprise that I'm pleased at the outcome of the presidential race. I may not agree with Obama on every policy issue, but he's intelligent, articulate, and inspiring - very presidential qualities that have been sorely lacking in this country for far too long. Perhaps when I have more time, I'll expound on what I think he and the Congress should be doing to address this financial mess.

On the matter of Prop 8 in California - and, for that matter, the other hate measures that passed (unsurprisingly) in Florida, Arizona, and Arkansas - I can only say this: The sanctity of marriage was never the issue. A marriage is never sanctified by the law, or by the involvement of a minister, or even by a deity. What ultimately makes a marriage sacred is the hearts of the people in it.

What Prop 8 and the other measures were about was power, pure and simple. The majority wielded their power to deliberately hurt a minority whose existence they oppose. And in that, it is no different from any other type of discrimination. The authors of Prop 8 may claim a Biblical foundation for their actions, but growing up in the post-segregation South I was still taught in church the Biblical basis for anti-miscegenation laws and for segregation. Who now is to say where the hate will stop? After all, James Dobson needs to get his millions from somewhere.

I'm making good progress on the first sweater sleeve and am nearly halfway through the raglan decreases. Since it's primarily stockinette and curling like mad, though, there won't be any photos for a bit. So far it looks as though my alterations to the pattern are working well for size, but it'll be more telling when I've got the body well in hand and I've got another sleeve to go yet before I start getting into that.
Posted by Mel at 4:49 AM 11 comments:

It's All About Me

Since I finished off the handwarmers and Tuck's sweater, my hands were finally free to start a sweater from my newly acquired Japanese pattern books. This is sleeve #1 of a raglan sleeve sweater, and it's the first time I've ever done a sweater that requires assembly. By which I mean real assembly, not fold it and sew up the sleeves like the Baby Surprise Jacket. While I was adapting the pattern from something to fit a scrawny Japanese dude, I suppose I could have adapted it to seamless construction. It's actually a pattern that would be fairly amenable to it, I think. I decided not to, though, because I thought it would be a good exercise for me to do the seaming at least once.

So here I am venturing into unfamiliar waters, but so far I'm getting gauge and there are only 35 more rows to go before I start the raglan shaping. I just need to get it finished soon. It's getting cold out!
Posted by Mel at 3:26 AM 3 comments: