Heading Down the Mountain

We got to Riwalsar from Delhi in record time yesterday, despite it being a big holiday. I got a quickie tour yesterday afternoon from Joy, Lena & Nyondo's housekeeper Chinta, who knows maybe half a dozen words of English. I know only slightly more Hindi.

Today, though, my mom put on one of her new salwar kameez, which she had made in Delhi, and after we convinced her that she would fit in beter and look less like a tourist in them, we headed down the mountain into town. It was a longish day of running around town and meeting some of the movers and shakers who are helping to make this little project of mine become a reality, so I was a little worried about how my mom would fare, since her knees aren't what they used to be. She held up quite well, though, and will hopefully sleep very well tonight.

Anyway, since we knew we'd be running errands and needed to get around a little, we held off on taking cameras down with us. Nyondo brought hers along, though, and got this one of my mom taking a break on a stoop with a little old Tibetan woman on the right and a Kinnauri woman who came along while I was down in one of the monasteries spinning prayer wheels. I found out afterwards that the Kinnauri woman was so taken by my mother that she had to feel her all over, just to check her out properly. 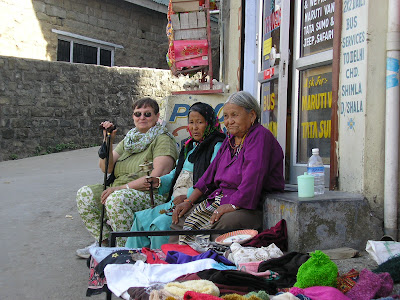 What a sweet picture, your Mom's a trooper!!

Yay for Eldest Son(s) who take their mother(s) on exciting trips, and yay for mothers who are game for the adventure!