Delhi, Days One and Two

note: This was written offline on Friday evening, then just updated now. Finally found wifi, thanks to Desiknitter!

We got to Delhi last night and got through our first day here without any problems. Or at least none that were critical. I suppose it could be premature of me to say this, but I think my prior travels have helped prepare me enough to avoid serious culture shock. Really, in a lot of respects, Delhi is very much like Lima – sprawling, noisy, polluted, dusty, etc. There's just twice as much of it here. In fact, coming in on the plane last night, you could see the city lights bouncing off the thick haze. My snot is coming out grey, and my throat is raw this evening, so that aspect I certainly won't miss when we leave the city.

Fortunately, the Tibetan-run guest house where we're staying, Likir House, is a little off the main thoroughfare, so the noise is a little bit dampened. Also, we're in an area of South Delhi that's not heavily trafficked by tourists, which means fewer touts and beggars, as well. And my time in Spain dealing with the gypsies taught me well the importance of not making eye contact with all the people yelling, “Sir! Sir! English?”

Of course, the big disadvantage of being in a less touristy area is that wifi hasn't made many inroads in this neighbourhood yet. We're just a short distance from a Starbucks wannabe chain store that typically does offer pay-as-you-go wifi, but the local one doesn't have it, nor did they know of anywhere nearby that does. And when we got cell phone SIM cards today to make calls on the cheap (srsly, about $0.48/min. to call the US), I figured for sure they could tell me where I might find a connection around here. No dice. So I'm typing this out in our room Friday night and planning to post it tomorrow afternoon when we go to Connaught Place to meet up with Desiknitter.

No Delhi Belly yet, either, but we are trying to be a bit careful about what we eat and there are several more days to go before we head north. Still, I figured this would be as good a time as any to share a few pics from the bathroom here in our room. Richard, this is especially for you.

We're actually relatively fortunate to be staying somewhere with Western-style toilets, since the traditional norm in these parts, as in many other parts of the world, is a squat toilet. Still, the septic systems around here aren't equipped to handle things like toilet paper. Hence the little wastebasket sitting next to the toilet. 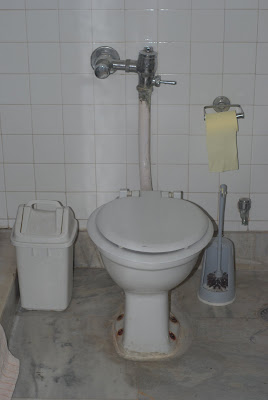 For those who are accustomed to squat toilets and aren't part of the TP set, the room is also equipped with this: 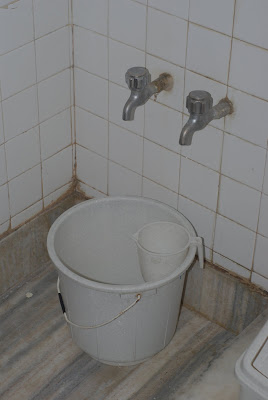 How this is supposed to work is that the big bucket gets filled, and while you're squatting, you use your right hand to wield the pitcher while using the left to do the job toilet paper does as you pour water down your crack. A bit of a complicated operation to perform, and it's the reason that handling food with your left hand here is a serious faux pas. On the other hand, when one has the Delhi Belly, it's probably kinder to the hiney than constantly abrading it with TP.

The bucket also comes in handy, I've found, when your geyser decides to blow up. And when I say geyser (pronounced “geezer”), I'm talking about one of these: This is where hot water comes from. Or sometimes not. It worked fine this morning, but when my mother went to turn it on in preparation for washing off the day's grime, the switch sparked and smoked and the little light on the geyser went out. Which, naturally, prompted her to flip the switch on and off several more times.

Hopefully it will get fixed tomorrow, but tonight it meant squatting in the shower and strategically soaping up and splashing water from the pitcher to get clean. I figured it'd be less of a shock to the system than standing in a cold shower. It does, however, make one tend to hurry up.

Oh, and one last thing before I go. Actually, it was one of the first things we noticed when we got to our room last night. Check out the bathroom tiles. 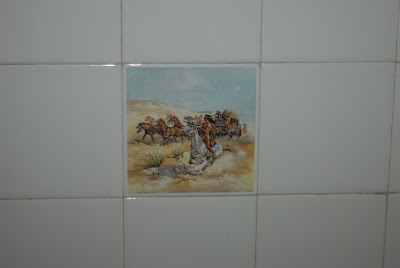 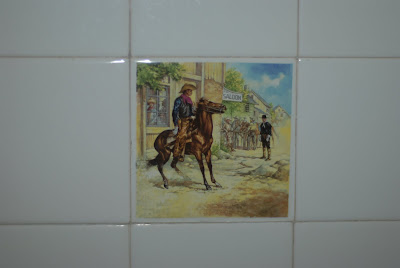 Gives cowboys and Indians a whole new meaning, doesn't it?

Well, not much to report, really, except that we met up for coffee with Desiknitter. It was really nice to meet up finally after following each other's blogs for so long. We spent a bit of time getting to know our own section of the city better, too, and I took a couple photos sitting out on the porch of Likir House.

The guest house is located on a small square that's surrounded by apartment buildings. This is the power source for all the buildings: 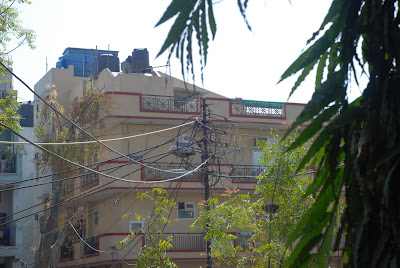 They've also been doing some beautification in the area. Note that there's no paintbrush involved in this operation (the occupational hazards of which I'm trying not to think too much about): 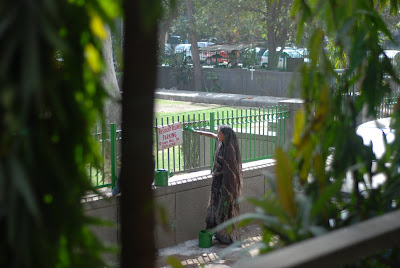 And that'll have to do for now. We're about to go try to find the brand new Delhi Metro and head up into Old Delhi to see some of the sights there. I may even manage a photo or three!
Posted by Mel at 4:45 AM

Yay you posted. And I feel all edified about the no TP process. I had no idea! I hope you never get Delhi belly.

Fascinating! Although, I'm certain I'd have some problems in the loo since there seem to be a great deal of steps required to make it in and out of there with the job done.

Still, I envy you having the chance to experience the culture. Enjoy and avoid that Delhi Belly!

Fascinating. And we always joked we should have taken pictures of the different toilets we saw in the Netherlands.

It does look like she has a piece of rag or sponge or something in her painting hand.

My verification word is "wifillo"! Weird.

i miss you, now go buy some tic tacs so you don't get sick from the dust and dryness!!
ooxooxxxxox

Hopefully you'll both keep that Delhi Belly away. I really enjoyed the bathroom pics! Hope you and your mum are having a blast.