Our New Bundle of Joy

There is one, but not the one we thought we were going to be getting. It's a long, sordid tale, but the super brief version is that the co-owner of that pup, who had been raising him, decided on Tuesday, the day before we were to get the pup, that she couldn't give him up. We found out later that she had been blindsided and railroaded into the whole situation, so as much as we had become emotionally invested in the idea of having him, we certainly understand her feelings and wish her and the pup the best.

Anyway, since we were back at square one, we went back to some of the other leads we had. I had filled out a very extensive (and novel, and very impressive) online screening questionnaire at one breeder's website but had not heard back, so I e-mailed them and briefly explained our situation. Not too long after I got a very nice e-mail back telling me that they had an adult male, a champion show dog they'd recently retired from their breeding program. They thought they'd found a home for him, but that situation fell through at the last minute, also on Tuesday. 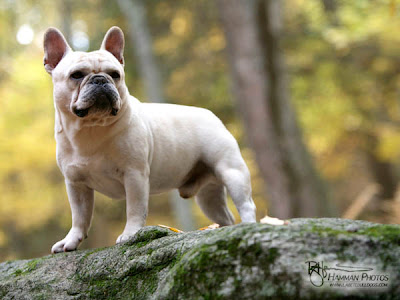 David and I decided that we wanted to meet him, so after a bit of e-mail exchange, we drove down to the same venue where David had met the other pup to meet the breeder, who was showing that day. We had a wonderful conversation with him and met the dogs he was showing, then agreed to meet elsewhere that afternoon to meet Chaucer, the boy they were trying to place. We also learned more of the back story regarding the situation with the other pup David had met. Suffice to say, it left us less impressed than we already were with the other breeders.

At any rate, he went home with the other dogs, retrieved Chaucer, and we met up in Connecticut to see Chaucer for the first time. He clearly knew SOMETHING BIG was going on and was a bit keyed up, but he was a sweet boy and asked me to pick him up right off the bat. So after spending another hour or so with him and the breeder, we decided to bring him home with us.

He was a bit wound up about the kitties, but he's been super good with them. He also has an incredible level of energy and loves to run and play, though he's perfectly calm and content to flop down and sleep when he's indoors. He's also extremely intelligent and willing to learn the rules of the house.

He is, of course, not Tuck. No dog could be. That said, the synchronicity that brought him to us could not have been more perfect. He has integrated into our household so seamlessly that, just as with Tuck, I can't imagine we'd have been able to find a better dog for us at this time. I don't really believe in much, but I do believe that some things are meant to be. This is clearly one of those things.
Posted by Mel at 6:32 AM

What a handsome guy! I'm so glad this story is taking a happy turn.

What a handsome fellow he is! Has he told you his name yet? Congrats to everyone involved.

Welcome home to the new member of the family!!

oh what a HANDSOME boy!! You are right--he can never fill the hole left by Tuck, but he looks like he can dig a very nice one for himself.

Just look at him struttin' his stuff. Glad it all worked out.

Chaucer, you handsome boy, welcome to your new home. Mwa!

He is a handsome boy for sure. And I love his name! I am a firm believer in kismet.