Prjón is Icelandic for knitting, and what kind of woolhead would I be if I didn't do a bit of stash enhancement in the Land of Lopi? Incidentally, I had never really given it any thought, but the correct pronunciation of lopi isn't LOW-pee (insert urination joke here). Neither the o nor the i are accented, which means they're both short vowels - LOH-pih.

Language lesson aside, I mentioned that there were lopapeysur everywhere. Seriously, it was knitterly inspiration everywhere we looked. I also mentioned that Ragga threw together a half day tour for us. Knowing that David is a designer, she took us to the studio/showroom for one of the labels we saw quite a lot of in Reykjavík and which we were really impressed by - Farmers Market. As it turns out, the owners are friends of hers, and it was great to get to look at some of their designs up close. (Yes, I know they're on hangers, but it's a tiny showroom and the most efficient way to display samples.)

And not only had we been seeing and loving their sweater designs all over town, we also saw a CD for sale at the symphony the night before that was the latest by the husband, Jóel Pálsson, who's an award-winning jazz saxophonist. So having met him, of course, we had to buy it. If you like jazz, I'd recommend it. Ragga also arranged for us to meet and see the studio of hot ticket designer Sruli Recht. Not as much of a ready-to-wear aesthetic there, but his work is still just beautiful and wonderfully artistic. Proving the Reykjavík-is-a-small-town argument, we also just happened to bump into him and his wife the following evening in another part of town as we were looking for a bus.

Anyway, after visiting those studios, it was off to the Ístex spinning mill to see the lopi being made. Ístex is the only spinning mill in the country, and they sell the lopi under their own label as well as producing for the Reynolds label. Same yarn, different ball bands. I didn't take any photos inside the mill, but David took some video footage that I'll try to share if either of us ever gets around to editing it. Or, you could just buy Ragga's DVD, where she gives a tour of both the spinning mill and the scouring mill up north in Blönduós. After the spinning mill was where things got really, really fun. Álafoss was the company that used to process the wool until they went belly up in '91 and Ístex stepped in and bought up the remains. The old Álafoss mill is now a yarn shop and a cluster of other artisans' shops, and the name still lives on in the name of the chunky lopi yarn, of which we bought a fair bit of. I got some to make a design in one of the Reynolds pattern books that I've always liked. The navy blue is an extra pattern color I'm working into the original design just for a little pop against the neutral base palette. I'm also taking inspiration from Ragga and working it top down. David picked out yarn for himself to work Ragga's Óðinn pattern, which is a free pattern written for traditional bottom up construction and is featured on the DVD. I also got a one kilo bale of plötulopi - aka, Icelandic unspun - plus a couple of contrast colors to make myself one or two more sweaters. I'm thinking seamless construction based on some of the Japanese sweater patterns I have, and I'm really excited to play with this wool. The sock yarn, which is Danish, isn't particularly great, but it was something to work on during the flight home. I also got buttons! Altogether, our wool purchases added up to roughly $135 US - that's for 3 to 4 sweaters' worth of lopi! Plus, Iceland has a tax refund scheme to encourage tourists to buy stuff. On any purchase over 4,000ISK that you will be taking out of the country, participating retailers give you a form to fill out which you can then cash in at the airport before you leave to get 15% of the total purchase back. Single purchases with a refund amount over 5,000ISK (i.e., purchases over 33,333ISK) require an extra step of obtaining a customs stamp EXCEPT for woolen products, which are exempt. You can buy all the wool you want. So what that meant for us was that the final tally on our wool purchase, which is a significant stash enhancement, came to about $120. Plus they put it in a nice, and very large bag for us. As a little aside, the old Álafoss factory also had a swimming pool complex, because the waterfall that used to power the mill also has geothermal springs, and local children used to learn to swim there. More recently, though, the building was used by the band Sigur Rós to record their first album. On our way back into Reykjavík, we stopped at one more LYS. It was otherwise a fairly typical shop, but it was where I made my most treasured find of the trip. It's a collection of traditional Icelandic textile designs, compiled over the course of 3 years from old manuscripts and containing over 700 designs, plus a history in Icelandic and English of the patterns and discussion of the rules of symmetry and mathematics of how the patterns were developed. And it's only available in Iceland. At the end of our afternoon with her, Ragga gave us four discount cards good for 15,000ISK off on of her Knitting Iceland tours through 2012, to use ourselves or to give away. 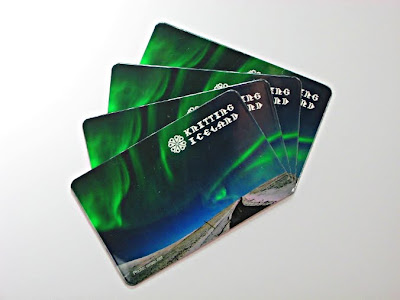 That morning she had been on the phone trying to reach her younger brother, who lives in Tokyo, as it was just hours after the earthquake there. And between that, and the New Zealand quake, and all the conflicts in the Arab world recently, I thought that the best thing to do with them would be to hold a drawing to try to raise funds for Médecins sans Frontières/Doctors Without Borders, who have been responding to both natural and manmade situations like this for forty years.

I expect most of you already know this, if for no other reason than for the Yarn Harlot's support of the organization over the last several years. They're an organization that gets the idea that we're all one human family and that we should take care of each other, and for that reason alone they deserve support.

So this is how the raffle will work: Make a donation to MSF between now and April 1 and send confirmation of your donation to me at mel(dot)vassey(at)gmail(dot)com with the subject line "raffle". For every $5 US (or equivalent in your own currency) that you donate to MSF, you will get one entry into the raffle. Donate $100 and you'll get 20 entries, but don't feel like a $5 donation is too little. It could buy enough medication to save a life.

On April 2 (my birthday!), I will use a random number generator to pick four winning entries. If you have multiple entries, you will have an opportunity to win more than one of the cards. As I said, the face value of each card is 15,000ISK, which is roughly $129 US at current exchange rates. Having seen what Ragga can throw together literally at the last minute, I expect these tours are going to be nothing short of phenomenal, especially with teachers like Ysolda Teague and Franklin Habit on board.

So go forth and donate, then let me know all about it. Then go to Iceland and have the time of your life.
Posted by Mel at 2:08 AM

that BOOK alone was worth the trip! AMAZING!

I am so tempted to make a joke about "loppy", but I guess I'll just say WOW.

Looks like you guys had a great time. :) Wonderful photos, you're giving me a complete obsession with getting over there!

I lived for 8 weeks in Iceland when I was a student and I LOVED it. Most of my family is Icelandic (they immigrated to Manitoba in the early 1900's).

You're posts remind me of how beautiful it was and how much a need to go back. It's such a magical place.

Did anyone show you how to wind your unspun yarn? two strands will make lite lopi, three will make standard weight. Wind it into a ball a couple times before you use it to make it stronger (gives it a little bit of twist)

Sounds like a knitter's paradise. I can't wait to see what you make with your purchases.

Great posts! I have been reading and re-reading them. I'm going this summer; just booked the flight. I met Ragga in NYC so may be able to do something with her. What I'm really anxious to know is which shop had The Book. Can I bribe you with a donation to Heifer Int or the Center for Wildlife? greenboatgb at netscape dot net

Love the wool!What a wonderful country-you're so lucky to have visited.

How I would love to go to Iceland. The nearest I've been is in books and film. Good blogs about your trip.

what has happened to you? I hope everything is okay? Miss you!

Hi there... it does seem that you had a great time visiting Iceland!

Are you learning some icelandic?

I think you might be a little bit confused about the rules about long or short vowels. That doesn't depend on the presence of an accent. In the case of the LOPI, "O" is a long vowel, not short. And "I" doesn't really matter because the rules for the length of the vowels are applied for the stressed syllabe, which is always the first one in icelandic.

There is a very good little book with the basic rules of pronounciation that I used in the University. If you're interested I could give you the name so yo can buy it at HÍ when you come in August.