They're Not Bigots. No, Really.

A couple of news items as we approach next Tuesday's referendum on marriage equality:

1) Rev. Dallas Henry of the christianist group Maine Family Policy Council, which is of course a strong opponent of marriage equality, is at least implying, if not outright saying it, that gay people plan to murder Christians in their sleep.

2) A lay Eucharistic Minister from a Catholic church here in Maine was removed from her post after she wrote an article that was published in a local paper in favor of allowing same-sex marriage. Because, apparently, having a conscience of your own is against Catholic Church teachings.

In other news, the Raffle for Marriage Equality has so far raised $910 for No on 1! Unlike the Yes on 1 side, in which over 80% of the funding has come from two out-of-state groups (National Organization for Marriage and Focus on the Family, both rather Orwellian names, IMO) and the Catholic Diocese of Portland, this campaign has been truly grassroots, with large numbers of donors donating in relatively small amounts that have added up to a truly impressive total. If you'd like to be entered into the raffle, you have until Tuesday, Nov. 3, to donate here. Even donations of $5-$10 are welcome, so don't feel like small donations don't matter or aren't good enough.

I received a package yesterday from VUBOQ with a lovely mug he made and has offered up as part of the prize package. I haven't taken any pics of it yet (bad blogger!), but here's a photo of it I stole from his Flickr stream: 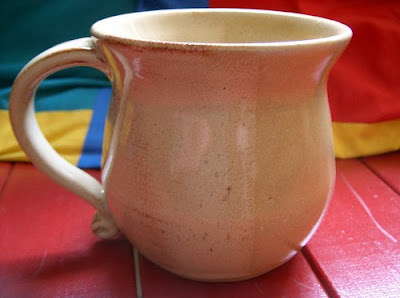 I think that it's not dishwasher-safe, but it's really very nice. My favorite detail is that little scroll at the bottom of the handle. Adorable!

Also, textillian has offered up some Brown Sheep superwash spinning fiber. If the winner doesn't spin, I may offer that up to the winner of the second drawing for furr'ners or even have a second place drawing. 5elementknitr has also offered up a set of her stitch savers - something every knitter should have in their toolbox (or on their keychain, as the case may be).
Posted by Mel at 7:13 PM

I've been appalled by the latest round of ads to hit the media this past week. Even the ones that are meant to sound "accepting" are offensive to me. I'm itching to head over to the gym to cast my ballot, even more so now!!!!!!!

(I didn't vote early because I so dearly love voting at the high school gym. Otherwise, I woulda...)

I've got a VUBOQ mug and it does just fine in the dishwasher.

I know I'm late, but I love that mug! I like the shape and the color and now I want a VUBOQ original!