Why Anna is a Merry Jew* 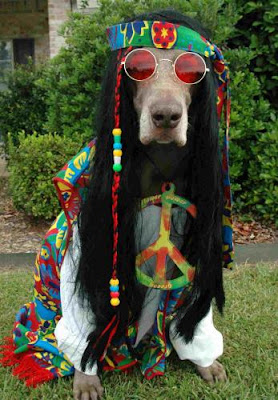 Stolen from these folks: http://www.greenposting.org/

Actually, the dog's name wasn't really Anna (though that's what I'm going to call her), nor was she particularly merry or, to my knowledge, Jewish. Her owners left her at the wife's parents' house this afternoon while they went down to Boston for a Red Sox game. When they got back, they found the dog extremely off balance and dribbling urine, so they did what most people do. They freaked out and brought her to see me.

When they got here, one of my techs brought the dog out back for me to evaluate, and sure enough, she was very wobbly on her feet, dribbling urine, and if she sat for a bit, she'd kind of slowly fall over and stare off into space. And I declared to all assembled, "That dog is stoned, and I am going to assume she ate pot until proven otherwise." So my techs did the usual asking of questions: Antifreeze? No. Mushrooms (not necessarily the magic kind)? No. Prescription drugs? No. Recreational drugs? No.

But then on the second round of questions (from me), it turned out that the owner's father is being treated for leukemia and, "There may be weed in the house." She was fairly certain, though, that he was anal-retentive enough to keep it locked away from the grandchildren and said parents are currently in England, so wouldn't likely have left stash out for the dog to find. And then a light bulb went on and she said to spouse, "Oh shit, remember those pot cookies we threw away yesterday?"

Turns out there had been some old chocolate chip cookies with a "secret ingredient" that they'd thrown in the kitchen trash, but they'd never actually gone back to check the trash when they found the dog falling over because they'd panicked. So spouse went back to the parents' house and sure enough, "Anna" had gotten the lid off the trash and all but two of the cookies had been snarfed. Mystery solved!

Fortunately, this is a good thing, as cannabis toxicity is a fairly minor concern and most cases will recover in a day or so with little to no intervention. We could have admitted her for IV fluids, but since "Anna" had probably gotten into the cookies about 9 hours or so earlier and she tends to get stressed out (or, dare I say, paranoid?) in veterinary offices, her owners decided to let her sleep it off at home.

The funniest part? The owners brother had been over to walk the dog in the afternoon and had noticed she was walking a little bit funny then. The time he came over to walk her? 4:20.

That is hysterical! Paranoid is what I always felt back in the day :-)

oh I am glad this story has a happy ending...poor pup!!

Dude. Milk-Bones are like y'know totally awesome, dude. They have those really freaky shapes and colors and and the flavors are just sooooo intense!

(At least it was something relatively harmless, though I'd hate to have to deal with a dog so stoned it's peeing all over the place)

I'm not sure which is funnier, the story or the photo. Thanks, you made my day!

Wow. It's funny, kind of, but I feel sorry for the dog. How, and why, do you toss out secret ingredient cookies and not think about the doggie equivalent of dumpster diving?

Aw, that's a cute story. It's not even possible to OD on weed is it?

And I needed your footnote!

Loved the "paranoid" bit! I'm surprised she didn't eat everything else in the house after that. (not like I'd understand or anything...)

Hah!!! Now I will laugh every time I see 4:20 scrawled across the top of a student paper or scratched into a table!

OMG!Too funny! Isn't it funny that her 'munchies' caused this problem and not the other way around?

I'm so glad you added the "merry jew Anna" at the end of the blog post...I never would have gotten why eating pot-cookies would have made the poor thing Jewish.

Very sweet and funny story...do you think your cousin's show could include a storyline like this?...Maybe they could ask House to do it instead.

That is unbelievably funny. My patients lie about their pot use also.

Once had my dog in at the vet because he couldn't stand up.

There was a dish of pot brownies on the kitchen table.

I interviewed EVERYONE but no one had fed the damn dog a brownie.

So I sent the dog off to the vet with hubby and brother, and the vet gave him all kinds of stuff - farm chemical antidote, anti inflammatory - and the dog was fine the next day.

I still think my stoner brother fed my dog a pot brownie, THEN didn't fess up OR offer to help with the bill!